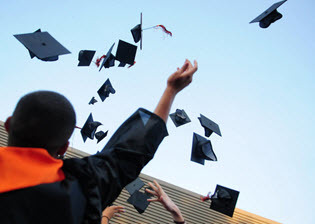 The scene was the Better Investing national convention last weekend in Chantilly, Virginia. It was the last session of the conference. The words rang out during Ken Kavula’s presentation of Ulta Salons (ULTA) as his shared stock idea for the May Round Table. He was — of course — talking about the differential between his teenage granddaughters and some of the “more experienced” clientele that may linger longer in the salon portion of the establishment. Sitting directly on Ken’s right (and within elbowing distance) frequent guest damsel Kim Butcher reacted immediately. “Decidedly older??? I’m fairly certain, Ken, that NONE of us ever want to be referred to as ‘decidedly older’ [Ken was probably grateful that his spouse, Natalie, was not in the room, too.]” The audience roared a second.

“Women, traditionally, become the subjects and objects of other people’s lives.” — Jane Fonda

And for that, we’re infinitely thankful.

Those words are from a TedX speech by Jane Fonda, delivered back in 2011 on the subject of “Life’s Third Act.” It features a perspective on longevity, aging and the shift to living longer and contributing more substantially during our last 30 years on the planet. If you liked Jane in her role on The Newsroom, you’ll probably like these 10-12 minutes via TedX.

The audience at the BI national convention is still not getting younger from a demographics perspective. That said, I’d argue that the shift described by Fonda has been a work in progress for some time and that investment clubs and individual investors have indeed been transforming for a few years. We’re witnessing the transformation of rote methods into deeper understanding and in so many cases, pervasive market beating performance over decades. The Super Investor session that I delivered in Chantilly (Beltway Super Investors) featuring Eddy Elfenbein, David Gardner and a slipstream sample of investment club leaders was very well received and we’ll do more.

Ken and I (and many of you) make “coaching club visits” to a fairly large number of clubs. We’ve witnessed an evolutionary shift. Few clubs make some of the traditional mistakes and the portfolios we see are better designed, better positioned and better maintained. So many clubs embrace our efforts at interpretation, innovation and implementation of the delightfully few things that really matter and we’re grateful for this evolving simplicity … and the results we observe.

During a few moments with some decidedly experienced investors in Chantilly, we were encouraged to keep seeking the foundations of Nicholson’s vision. Some observed that the Nicholson moments we reinforced back at the national convention in Chicago a few years were landmark. And most welcome. We were encouraged to do more. A dear friend who knew Nicholson well urged us to continue to re-discover and reinforce … Press on.

The modern investment club movement is less obvious at a time when it’s probably needed the most. Diebold is back to 98% institutional ownership from the 54% it achieved less than ten years ago. It’s enormously challenging to engage the interest of most people, most young people, and even most decidedly older people in ownership of individual common stocks. (By the way, RPM presented at the conference and appears to be stronger than ever)

I think Jane Fonda is right, an opportunity lies ahead. In her words (with a dash of paraphrasing) …

“Circle back to where we started — and know it for the first time. We could be a necessary cultural shift in the world.”

Inspire younger generations to optimize and maximize their investing experience.

Be decidedly older. Do it well.

Value Line Low Total Return (VLLTR) Forecast. The long-term low total return forecast for the 1700 companies featured in the Value Line Investment Survey is 5.6%, unchanged from last week. For context, this indicator has ranged from low single digits (when stocks are generally overvalued) to approximately 20% when stocks are in the teeth of bear markets like 2008-2009. 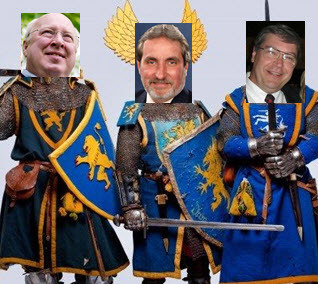 We gather. The convention serves a unique purpose. Because connecting investors can prove to be the most valuable resource imaginable for individual investors. In that context, the national convention becomes a true investment club — centered on sharing and discovering actionable ideas and pursuing successful investing, together.

During the current Book Club review of Peter Lynch’s Beating The Street, Hugh McManus mentioned the special session with Peter Lynch at the 1998 NAIC national convention in San Jose. Lynch reviewed many of the key points covered in the book during his speech. This reference inspired me to track down a copy of Smart Money from January 1999 where Emily Harrison Ginsburg provided a story on the heritage of NAIC via Thomas O’Hara. I thought Emily mentioned Peter Lynch in the article, but on further review, I found that she hadn’t. If you’re new to the investment club movement or simply want to go on a nostalgic binge, the Smart Money feature can be found here.

Value Line Low Total Return (VLLTR) Forecast. The long-term low total return forecast for the 1700 companies featured in the Value Line Investment Survey is 5.6%, up from 5.4% last week. For context, this indicator has ranged from low single digits (when stocks are generally overvalued) to approximately 20% when stocks are in the teeth of bear markets like 2008-2009.

Watching Rhino Walk, Not Rhino Talk. If you believe supply-and-demand matters (and you should) then the collective actions of the herd have bearing. By monitoring the relationship of new highs vs. new lows, we get an early warning clarion that signaled as Halloween 2007 approached. Current $USHL has recovered somewhat from the “test” a few months ago. 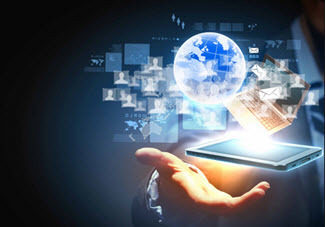 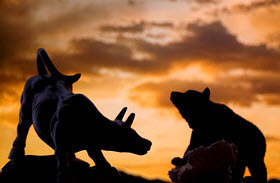 One of the Best Long-Term Forecasting Methods

“If you have to forecast, forecast often.” — Edgar R. Fiedler in The Three Rs of Economic Forecasting-Irrational, Irrelevant and Irreverent , June 1977.

It was two years ago that Mark Hulbert featured some words about our approach to long-term forecasting in the context of some editorial on the efficacy of The Value Line Investment Survey.

Here’s a quarter-by-quarter illustration of forecast vs. actual for the Value Line companies:

This was essentially what Mark Hulbert was sharing in the article, Finding The Best Four Year Market Forecaster.

To us, although the absolute math is important — what really matters is the “shape.” This would suggest that we’ve still got a few quarters of upward-sloped plateau ahead of us. But the “swoon vulnerability” is still pretty high and the reality is that no one knows when the next market break will hit or how “corrective” it will prove to be.

The average Value Line low total return forecast for the companies in this week’s update batch is 3.0% — lower than the 3.7% for the Value Line 1700.

Less turbulence again this week in the updates although there were more companies dropped from coverage than we’ve seen in a very long time.

Value Line Low Total Return (VLLTR) Forecast. The long-term low total return forecast for the 1700 companies featured in the Value Line Investment Survey is 3.7%, a slight decrease from 3.8% last week. For context, this indicator has ranged from low single digits (when stocks are generally overvalued) to approximately 20% when stocks are in the teeth of bear markets like 2008-2009.

For more on this chart: Origins of the $USHL Indicator

I’ve been giving some thought to a database-wide screening summary of “deeper value” opportunities that we’d publish on Tuesdays. Keep in mind that the results of our Monday morning efforts are focused — as they should be — on 1/13th of the stocks we cover and on behalf of shareholders and stock watchers.

OK, it’s really a Baker’s Dozen — culled from the full database and it’s based on two things:

I’m thinking that it could be meaningful when these opportunities converge with the longer term opportunities. The table provides the top (13) such companies on 4/21/2015 — and we’ll see how this behaves/performs over the next few months.