Skip to content
HomeHoping For A Pandemic of Perspective

Hoping For A Pandemic Of Perspective

The Covid-19 challenge is serious. Very serious. Nothing about these remarks is intended to be light-hearted or flippant. It’s a fact that I lost my father recently and the cause listed on his death certificate is “Coronavirus.” The country and globe are actively attempting to suppress the potential exponential growth of the Wuhan virus — and every effort could be instrumental in saving many, many people.

No one knows what the economic impact of this mission will be. No one knows with any certainty how long the measures will be necessary. We did have a positive indicator in that schools in South Korea are considering resuming their schedules. That brings the notion of “finite period” into better focus. There are also encouraging signals on confirmed case growth and mortality rates in many geographies. And we pray for significantly better results from places like Italy, etc.

With an element of “This, Too, Shall Pass …” we look to the investing world with disrupted confidence and dented expectations. That said, with the passage of time, we expect to look back on this time as also a period of opportunity. For anybody still signing the back of a paycheck with any level of reasoned risk tolerance, the Generational Opportunity words of Jim O’Shaughnessy are compelling.

We — this Community — are by nature, optimistic and willing to carefully consider opportunity. In that spirit, I have this feeling that we’re in days that resemble November 2008. We began accumulating assets that continued to decline and had to wait until March 2009 for the recovery to get into full swing. I’ve been accumulating shares of Nasdaq-100 (QQQ) every time the relative strength index breaks below 30 while I shop for the types of stocks that we’ll cover here. 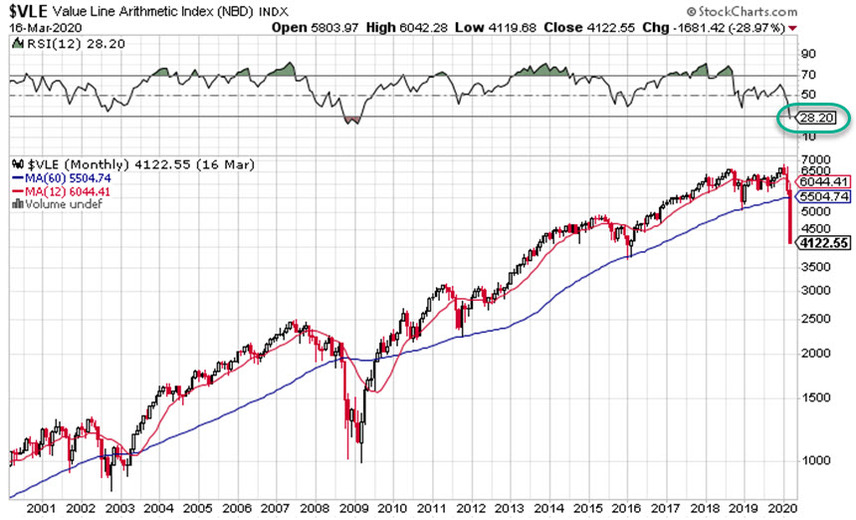 All-Of-The-Above Investing ($VLE) takes a considerable “hit.” If there’s a refuge or safe oasis among the 1700 stocks in the Value Line Arithmetic Average, I’m having trouble seeing it. The index has been under pressure — lagging the S&P 500 and Wilshire 5000 for some time — as the smaller companies have struggled fairly mightily over the last couple of years. But what I’m also having trouble seeing is the widely spewed opinion that this swoon is “unprecedented.” On closer analysis of this 20-year view of this collection of stocks, does this look unprecedented to you?

Yes … the “velocity” of the price drop from all-time highs in February to current levels has been brutal. I doubt that we’ve seen any major index go from overbought (RSI>70) to oversold *RSI<30) in less than a month. 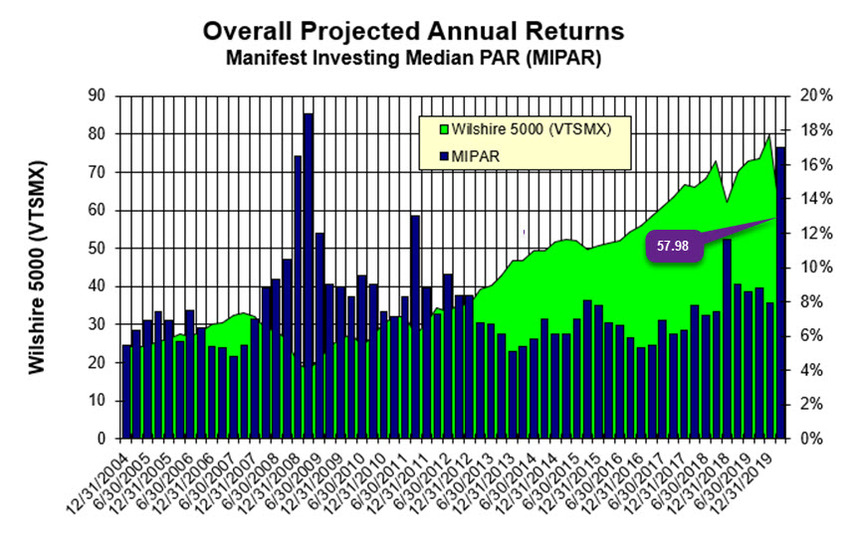 A number of respected economists have suggested that a recession is already here. They could be right. Why do we care? Because, as we’ve documented here for a long time — when a recession hits, what really materializes is a tidal wave of companies deflecting to negative earnings, a condition that makes analysis very challenging. In fact, we discussed the nature of the 2008-2009 CHASM fairly extensively as we navigated those choppy waters back then.

So are we looking at a chasm? How deep? How wide?

In the pursuit of some perspective on this, we’ve gone ahead and moved up our fundamental updates on all of the Value Line industrials — a group of approximately 1400 companies. The analyst consensus estimates for revenues and earnings for 2020E, 2021E and 2022E provide a closer look at the onset of a developing chasm. Those results (and current condition) are shown here: 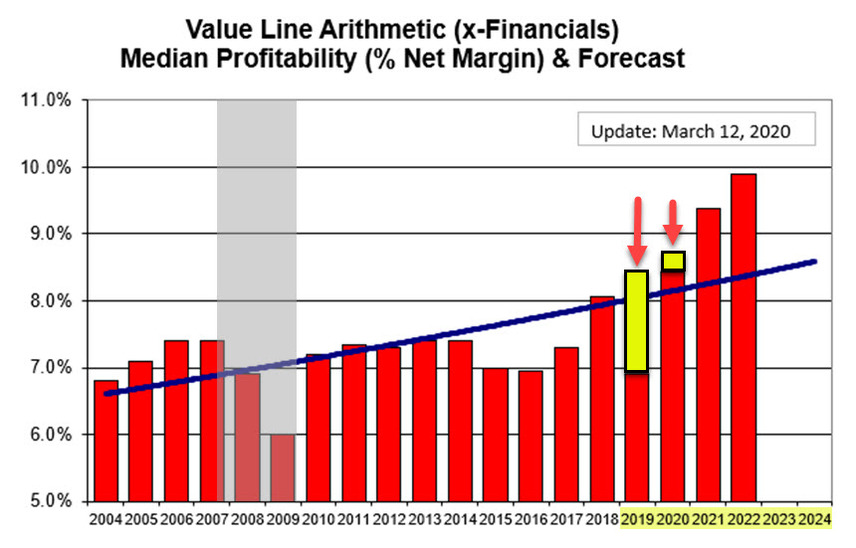 Value Line Industrials (ex-Financials) — Profitability Trend & Forecasts. The longer term trend (blue line regression) is STRONG. The impact of the 2008-2009 recession is displayed as the median net margin dropped to 6%. We note that expectations a few months ago for 2019 net margin were in the range of 8.4%. Much of that evaporated as 2019 came to a close and those hoped-for levels were not attained. There are still several companies wrapping up final numbers for 2019 but it should be clear that some disappointment was inevitable. I may have missed it, but during January and February, I don’t recall too many Wall Street rhinos talking about this erosion of expectations. We note that there’s been moderate slippage in 2020E expectations and we’ll be watching this aggregate closely (read daily, published weekly) as analysts work to envision how detrimental the current economic isolation will be for many companies. We also note that any “degradation” over the next 12-18 months could lead to a downward adjustment to the longer term growth and profitability forecasts.

The Wall Street rhinos have circled the crash (as shown above) and we’ll be watching them closely.

Storm In Progress … Time To Be A Buffalo?

There’s a great lesson that can be learned from watching the behavior of cows and buffaloes when it comes to the onset of a serious storm.

The cows will align and walk/run in an attempt to out run the advancing storm. They don’t run very fast — and the outcome is certain.

So the storm catches up with the cows rather quickly. And without knowing any better the cows continue to try to outrun the storm. But instead of outrunning the storm they actually run right along with the storm. Maximizing the amount of pain and time and frustration they experience from that storm!

The cows end up huddled and drenched or neck deep in a snow drift.

Humans do the same thing all of the time. We spend so much of our lives constantly trying to avoid the inevitable challenges that come along with the difficult circumstances that our very own choices have led us to be in. 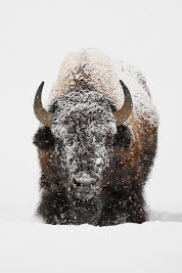 The reaction of a buffalo is just the opposite. They will turn in the direction and head towards the oncoming storm, courageously charging ahead.

What buffalo do on the other hand is very unique for the animal kingdom. Buffalo wait for the storm to cross right over the crest of the peak of the mountaintop and as the storm rolls over the ridge the buffalo turn and charge directly into the storm.

Notice how it’s the exact same storm. It’s such a great metaphor for all of us because all of us are dealing with the same types of storms.

What To Buy? Consider ‘Toilet Paper’ 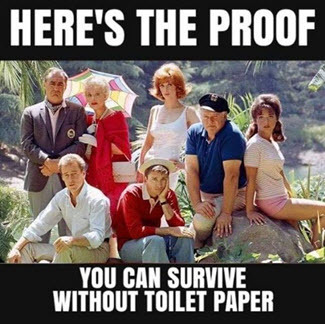 The legends about the hoarding of toilet paper and kitchen towels are true. The shelves are empty at all of the local grocery stores. Any incoming inventory is stripped from the pallet and never makes it to the shelves.

I have a secret. The demand for toilet paper is relatively constant. (See accompanying chart)

This is another case of “This, too, shall pass.”

I will share that I made observations about this on social media and one of our Florida colleagues suggested that perhaps Bounce, the laundry sheets, might provide an acceptable stop gap measure. In her words, “my bottom is now pleasantly scented and static free.” Our son Alex and I dutifully checked the next aisle over and sure enough … there were several containers of Bounce. We placed a limit order.

There are few things steadier than this toilet paper consumption trend: 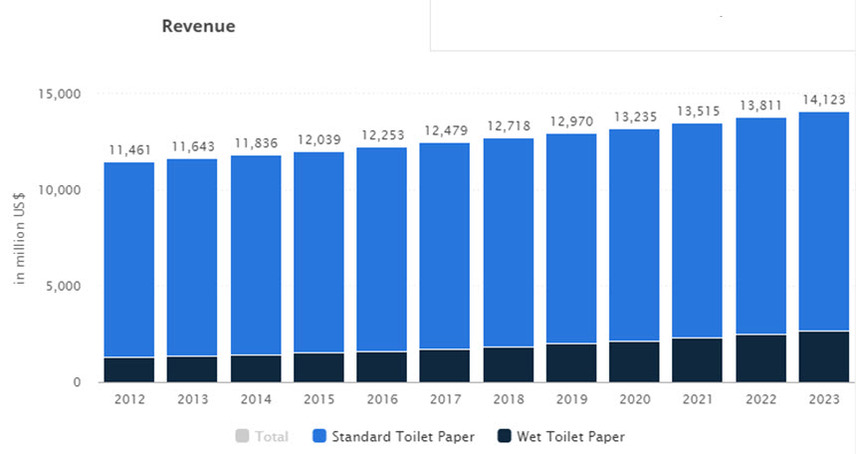 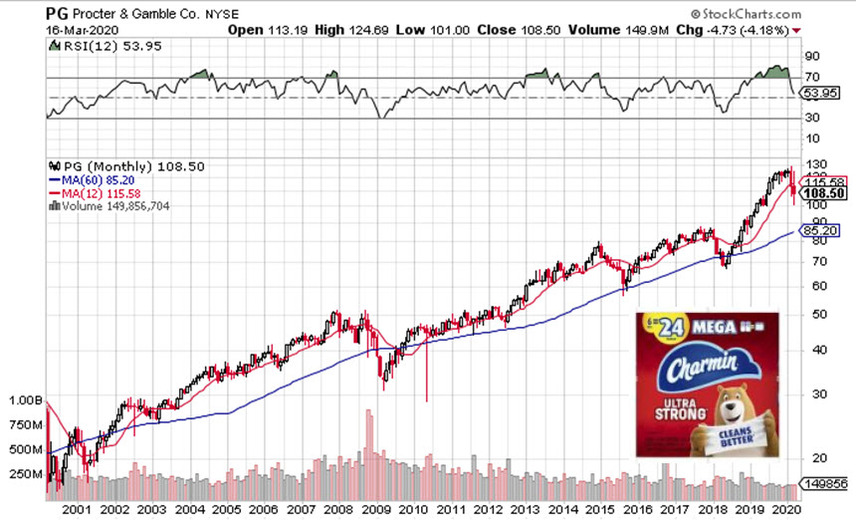 So part of our mission is to identify opportunity among companies with leadership earnings stability. Here’s a short list of high-quality companies that are less economically impacted due to their ability to “bounce back” and persist during supply and demand-side challenges and disruptions.