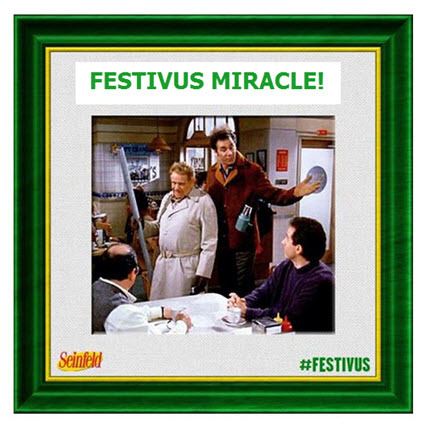 December 23. Happy Festivus! Festivus is both a parody and a secular holiday celebrated on December 23 that serves as an alternative to participating in the pressures and commercialism of the Christmas season. Originally a family tradition of Seinfield scriptwriter Dan O’Keefe, Festivus entered popular culture after it was made the focus of the 1997 episode “The Strike”. The non-commercial holiday’s celebration, as it was shown on Seinfeld, occurs on December 23 and includes a Festivus dinner, an unadorned aluminum Festivus pole, practices such as the “Airing of Grievances” and “Feats of Strength”, and the labeling of easily explainable events as “Festivus miracles”.

This week’s stock study selections are “a Festivus for the rest of us!”

The primary driver for the screening criteria was the 1-year total return (via analyst consensus estimates) but the field was limited to companies with a Manifest Investing rank of 90 and above (based on long-term return forecast and quality ranking).

For context, the average 1-year ACE total return forecast is currently 8.0% for the approximately 2400 companies in our coverage.

So we’re looking for that 1-year miracle … as a case in point, the analyst consensus for Rocky Mountain Chocolate Factory (RMCF) has a 1-year total return forecast of 78.6% based on an expected price of $18 and a 4.7% yield. The problem is that the ACE committee of analysts is N/A.

The relative/excess return for the Fave Five tracking portfolio is +3.7% since inception. 46.3% of selections have outperformed the Wilshire 5000 since original selection.