“Everybody who has ever invested during our darkest days has ultimately been rewarded. There’s no reason to think this time is different.” — Michael Batnick

“In the next two weeks we will witness a breathtaking degree of human ingenuity. It’s starting to bubble up now. The most capable among us are now fully engaged. That virus doesn’t know what’s coming for it.” — Scott Adams

“… for young investors, this is perhaps a once in a lifetime gift, and they should do their best to open and make maximum contributions… — Jim O’Shaughnessy, A Generational Opportunity 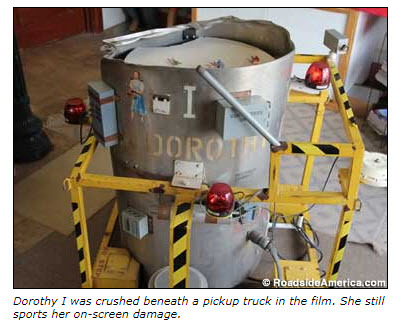 There’s a scene in the movie where the chasers dine at Aunt Meg’s house in a sort of scrambled eggs and pancakes royal feast. (And beef, it’s Oklahoma, after all…) They return to Aunt Meg’s a few hours later to find the house leveled by a tornado. Aunt Meg and her dog are rescued from the debris and the balance of the movie revolves around seeking refuge, dodging flying cows … and the ultimate final scenes where Helen Hunt and Bill Paxton strap themselves to a pipe in a barn as the entire enclosure is removed from around them. And then it’s gone … the sun comes out and clear skies manifest.

“Things go wrong. You can’t explain them, you can’t predict them. … You gotta move on. Stop living in the past, and look what you got right in front of you.” — Bill Harding (Bill Paxton)

The central theme of the movie is to chase down and “inject” a tub of monitoring devices into the center of a tornado so that scientists could study anatomy, vectors, etc. and improve predictive capabilities for the benefit of many. One of these modules of sensors is shown in the accompanying figure and is named “Dorothy” in obvious tribute to those who’ve navigated over the rainbow.

But the real life, the device called “Dorothy” was actually named TOTO by the National Oceanic and Atmospheric Administration (NOAA). TOTO — which stands for “TOtable Tornado Observatory” — was a 55-gallon barrel outfitted to record storm data.

Enter our own “Dorothy” … 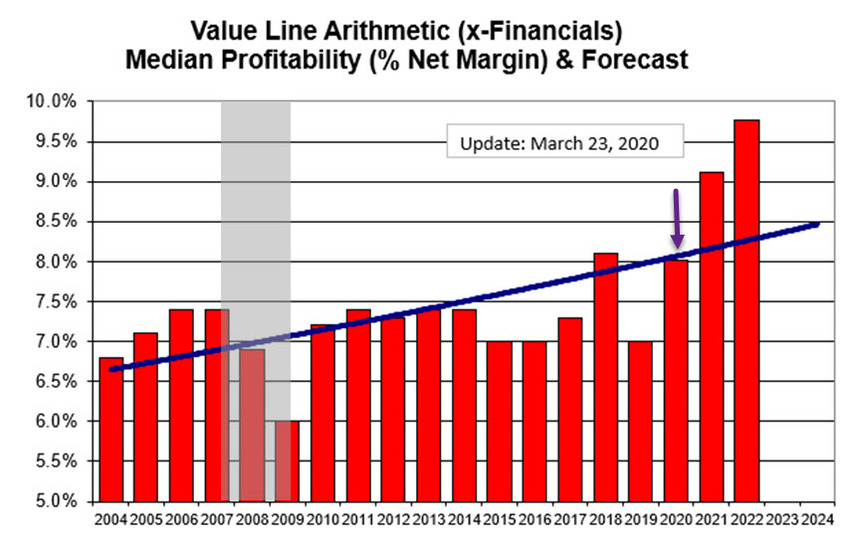 Whether we’re dealing with black swans, or a herd of buffalo simply trying to decide how to vector, or the wreckage from Aunt Meg’s house — clarity is a good thing. And although this won’t be perfect, at least we can come to terms with moderating forecasts as we attempt to understand how deep and how wide the current chasm challenge might be.

All 1400 companies that comprise the Value Industrials have current forecasts for 2020, 2021 and 2022 in our database. These are continuously updated (via YCharts) and will be shared frequently (at least weekly) going forward.

We’ve already seen that actual results for 2019 swooned while many people continued to marvel at “the best economy in the history of our country.” The rhinos on CNBC speak of unprecedented and undamaged “fundamentals.” They’re probably very, very wrong. My take is that it’s far from cataclysmic but not nearly as strong as many believe … and spew. 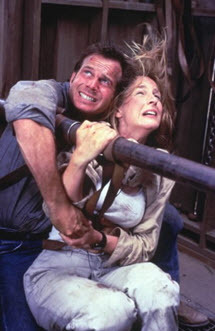 As recently as 3Q2019, expectations were for a median net margin of 8.5-9% for calendar 2019. As shown here, that didn’t happen. (Despite all of the fiscal stimulus and churning of stock buybacks, etc.) Expectations were for 9.0-9.5% in 2020. We’ll monitor very closely to see how much of a shortfall to expect, displaying it as soon as possible. But the 2020 year end median net margin went from 8.4% to 8.0% in just the last week.

[The main characters are in the shed hiding from an F5 tornado and Bill sees water pipes coming out of the floor.]

Bill: Here! These pipes go down at least thirty feet, if we anchor to them we might have a chance!
Jo: Have you lost your nerve?
Bill: Tighten your seatbelt.

Whether we’re talking about empty planes or empty restaurants… this too shall pass. We persisted through challenging times in November 2008 … backing up the truck and stepping on the gas in March 2009. We don’t have 30 feet of submerged pipe but we have nearly eight decades of wisdom and lessons deployed. We’ll chase the storm, dodge the flying cows … and attempt to navigate prudently this time, too.

The status of the 2020 Best Small Companies can be tracked at: https://www.manifestinvesting.com/dashboards/public/best-small-companies-2020 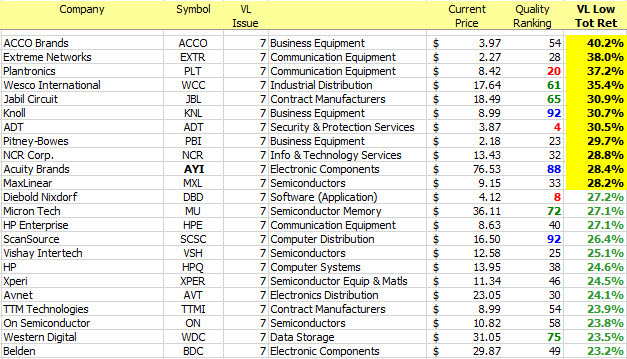 “There’s a huge difference between an expectation and a forecast in investing. An expectation is an high-probability acknowledgment of how things might happen. A forecast is a specific prediction. In investing, forecasts are dangerous.” — Titan Research 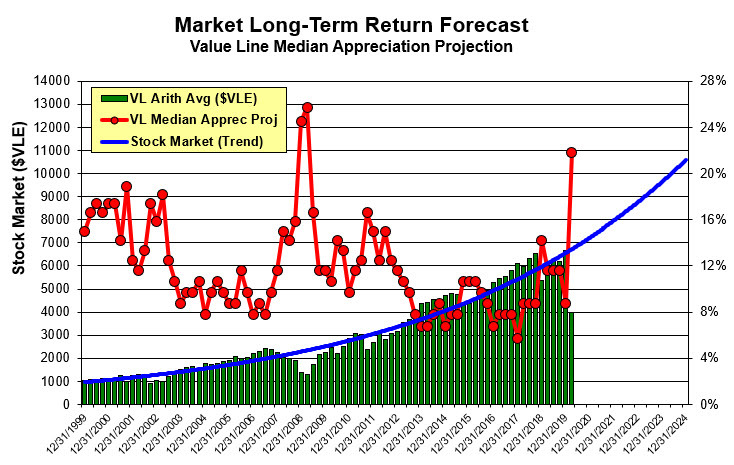 Value Line Median Appreciation Projection (VLMAP) Forecast. The long-term median appreciation projection for the 1700 companies featured in the Value Line Investment Survey is 21.8%, INCREASING from 15.8% last week. For context, this indicator has ranged from low single digits (when stocks are generally overvalued) to approximately 25% when stocks are in the teeth of bear markets like 2008-2009.

“It is my opinion that these future appreciation forecasts are going to be revised downward (and with larger downward revisions than currently expected/anticipated) faster than someone can yell, “Fire” in a crowded movie theatre.  In a word: It’s a Trap !!!” — Nick DiVirgilio 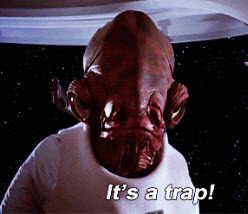 Some of the geekier among us will recognize Admiral Ackbar from Star Wars:

The phrase stems from a memorable quote said by Admiral Ackbar (voiced by Erik Bauersfeld), the leader of Mon Calamari rebels, during the Battle of Endor in the 1983 Star Wars film Episode VI: Return of the Jedi. In the movie, as the Alliance mobilize its forces in a concerted effort to destroy the Death Star, Admiral Ackbar encounters an unexpected ambush, which leads him to exclaim, “It’s a trap!”

And we’re getting perhaps a little geeky, but here’s a snippet of how we’re approaching this … and why I’m optimistic that we’re barking at the right tree.

There’s no way to know the duration and amplitude of this disruption — but at least we’re not flying blind with “static analyses” on the positions that we follow.

But … chances are … we’ll have a much better perspective on the CHASM than “average investors”. 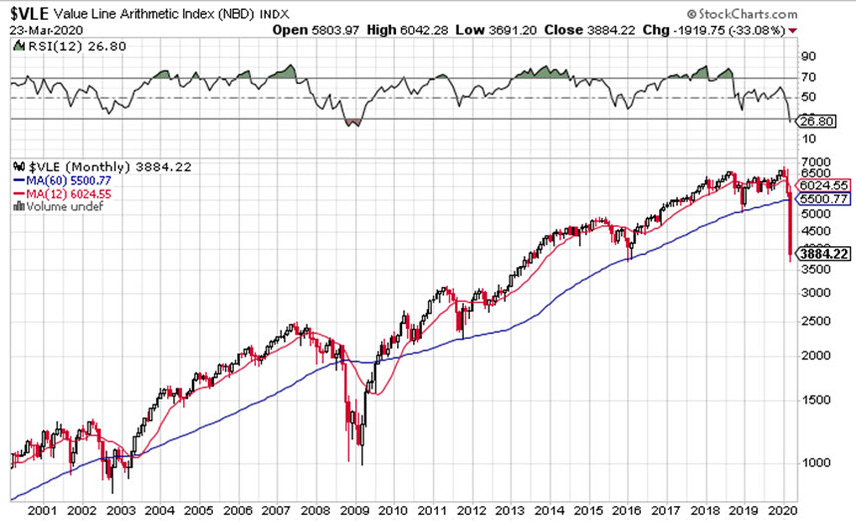 Value Line Arithmetic Average. We’ve reached relative strength levels that suggest potentially oversold. But a reminder nudges away in that the bouncing ball bounced at a “bottom” for several months from November 2008-March 2009, a period that seemed like a very, very, long time. 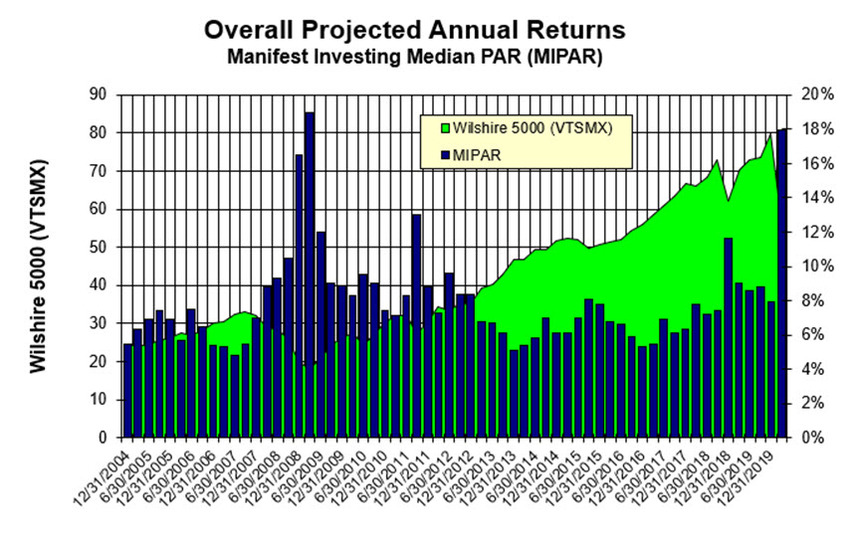 This one’s for Ted Brooks. Because he’s right about the algos and the Rise of the Machines.

You can’t look at this without noticing the daily transaction volume in the last 30 minutes or so (actually 15 … or 5) minutes of trading every day. 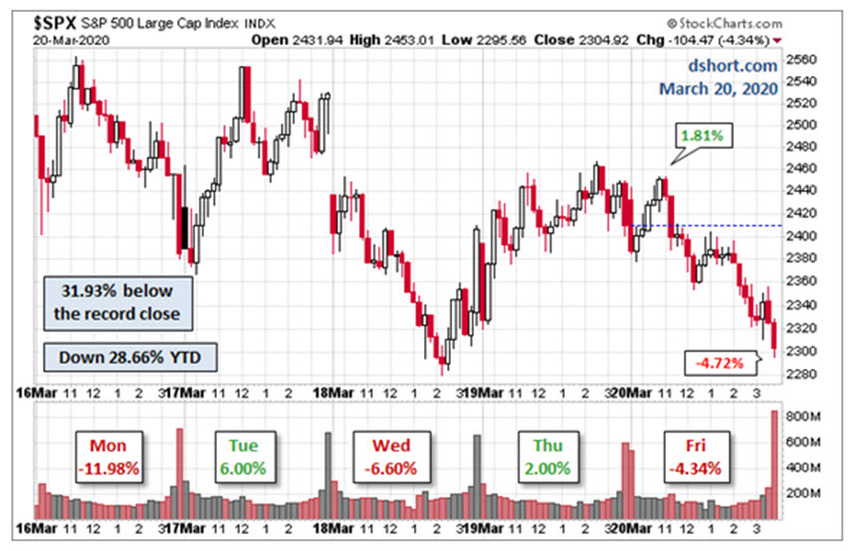 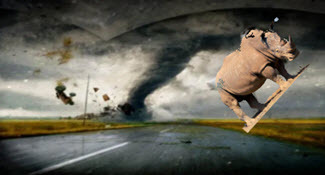 We didn’t expect our version of “Dorothy” (or TOTO) to capture the changing landscape quite this quickly.

Sure. Our beloved Wall Street rhinos are back at their desks — many of them probably working from home — and they’re clearly not in a good mood. A quick comparison of this weekend’s chart shows no improvement in 2019 … with continued declines in 2020E and 2021E … and the slope of the long term trend has already deflected enough that we can “feel” it in our return forecasts.