Skip to content
HomePosts tagged '1-Year Forecasts'
Press on.  2016, so far, hasn’t been much to cheer about.  But the long-term perspective hasn’t cratered and your 401(k) isn’t locked in the Titanic safe while a bunch of icebergs make like rocket-powered grenade launchers — no matter what those news anchors say.  Based on the things that matter to long-term investors, press on.  Here are some shopping ideas to rake across the fireplace coals while remaining focused on what matters. 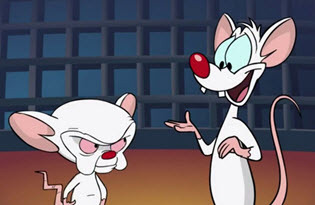 What Do We Do Now?

Answer: “Same thing we do every day, Pinky.” — The Brain.

Bottom Line: It’s still OK to be optimistic about the future. Invest. Invest well. Be selective and discover industry leaders when they’re on sale. Simply put, the same thing we do every day. Invest regularly. Although growth rates have moderated, Armageddon isn’t here yet and continue to design and maintain portfolios with overall average sales growth rates of 10-12% if you have a long time horizon and risk tolerance. Turbulent times shouldn’t be a surprise. To most of us, they’re not. Do not be surprised when P/E ratios moderate and retreat a bit as Quantitative Easing (QE) dwindles, interest rates swell a bit and the huffing and puffing that has bolstered the market over the last couple of years (while profitability was challenged) subsides.

The world ended at least twice during that sixteen year period. During the most recent excursion during the Great Recession, Warren Buffett shared that he hoped that he lived long enough to experience the next market break. Once again, he may be right. And present.

Value Line 1700. The arithmetic average (equal weighting) means that the index didn’t get extra credit for Amazon, Apple, Facebook, Google or Netflix during 2015. As such, $VLE was down -6.9% during 2015 as shown by the 12-month rate of change (ROC) portion of the graphic.

We like to do much of our shopping here. 39-of-the-40 most widely-followed stocks by Manifest Investing subscribers hail from the 1700. Only PRA Group (PRAA) is a current exception — and may actually warrant some accumulative speculation at this time. More on that later.

We believe in all-of-the-above shopping and we know that it makes strategic sense to discover and own large, medium and smaller companies in order to nail down that balance between the slower growing blue-chip stalwarts and the promising upstarts. The Value Line 1700 provides a pretty good vista of qualifying opportunities. We do look forward to the day when some of the Best Small Companies For 2016 join the VL 1700 and ultimately, the MANIFEST 40.

The other reason is that we like to be Schlossian in our investing efforts. For those unfamiliar, check out the works of Buffett colleague and friend, Walter Schloss, and his reinforcement that any and all of us can do this — and experience successful long-term investing. Walter rarely shopped outside the VL 1700.

The long-term growth rate of the aggregated sales for the Value Line industrials is now approximately 6% — a condition “eerily” suggested in our June-2009 cover story, Grated Expectations

If we squint, we can see 2015 take a “dip” that actually rivals 2008-2009 a bit. This probably accounts for much of the angst prevalent among most of the talking heads.

Yes, Europe continues to struggle. China slows. Demand for petroleum is stunningly low at a time when production is peaking despite the curtailment of higher-cost production alternatives that have terraformed the energy landscape over the last few years. The American consumer is better but still slogging through molasses when it comes to disposable income and consumption. Political candidates tell us just about anything they think we want to hear to get elected.

But it ain’t Armageddon. It’s not different this time.

And this is why we invest.

This image is probably the keystone in our long term perspective.

First, it’s a tribute to the optimism of the Value Line analysts. Their 3-5 year forecast for most companies is perpetually unprecedented. Someday we’ll have the dream of commercialized nuclear fusion, a cure for cancer and the common cold and they’ll be right with the long term profitability forecast. But for now, it’s our reminder to shave a little off the top while performing our own studies and checking in with the Value Line net margin (and ROE) forecasts.

Second, although 2015 was nothing to write home about, it’s not Armageddon either. The relatively low net margin results (still taking shape, by the way, as the 4Q2015 company confessions roll in) go a long way to explain that Goldilocks aura that many of us feel. Things are better. But they’re not what they should be — at least not yet.

That said, even discounting the 2019 elephant on this graph, the long term trend is favorable and American innovation and optimism is still alive and kicking. Imagine if we’d ever start to tackle/eliminate the corporate income tax malignancy that continues to give the rest of the world a head start and tilted playing field when it comes to manufacturing and delivering goods to We, The People. It’s on the list with fusion, cancer cures and we can dare to dream.

The surge was likely fueled by low inflation/low interest rates, shadowy accumulation of stocks and continued respect for the best companies who seem to prevail and persist in the face of steep challenges.

That … and probably a little exuberance thrown in for good measure. We noted that the Value Line low total return forecast did hover at multi-decade lows during this period and the same has been true for MIPAR (median return forecast for all companies covered at Manifest Investing.)

The P/E that matters most to us is the projected average P/E in our forecasts and the average for the 3-5 year forecast at Value Line seems headed more for 18x than 22×. It’ll be interesting to see the Value Line expectations when the data array ratchets one column soon, displaying one year further out.

MANIFEST 40: The Long and Short

In the preceding chart, some (including me) have wondered about the utility of gauging one-year expectations alongside our traditional long-term forecasts. Intuitively, I’d like to think that pursuing a company with a solid long-term perspective (relatively high return forecast) in combination with sentiment-fueled 1-year expectations could be an effective combination.

Looking back at the MANIFEST 40 from one year ago — the average 1-year total return forecast was 6.6%. The actual return from our favorite 40 stocks turned out to be 4.7%. (Keep in mind that the “average stock” was down -7%.)

But — for any given stock — as shown in the accompanying chart, it’s really pretty much of a “crap shoot” for one year results. This is not a surprise. We know this as the perpetual dance of the rhinos as short term forecasting is almost always Dremaned.

There is, however, a glimmer of hope. And it comes in the same type of condition that we witness with overall performance of portfolios vs. individual stocks. When gauging performance in groups, accuracy gets better.

In this case, the top six stocks with the best 1-year return expectations back in January 2015 actually delivered a combined performance of 16.7%. See FAST, GE, GOOG, JNJ, MSFT, and TEVA in the chart below.

The stocks with the six weakest 1-year expectations were CSCO, COH, CTSH, PAYX, QSII and WMT. These six combined for a collective result of 0.9%.

Results, Conclusions and the 2016 Outlook

First and foremost, we’re reminded that these (40) stocks collectively represent a top shelf collection of high-quality companies that rank among the most closely-followed stocks by our subscribers. To me, that means it’s a fertile ground for promising opportunities under the right conditions.

Based on the cursory observations made here, I think I’d be inclined to take a closer look at the six companies with the highest 1-year total return forecasts. Yes, I admit that I don’t expect correlation between forecast and actual for any of these flying on their own — but collectively, it’s as compelling as our dashboard-centered foundations. Those six stocks would be:

The average 1-year total return forecast for these six selections is 48.4%

The six stocks I’d avoid, or subject to a Spanish Inquisition if suggested any time soon, would be: Coca-Cola (KO), Exxon Mobil (XOM), FactSet Research (FDS), Fastenal (FAST), Quality Systems (QSII) and Wal-Mart (WMT). — because among many other factors, the rhinos haven’t forgiven some of these yet. (But it’s probably a temporary condition for most of them.)

With the maturity that embraces simplicity, Press On!