“There is little value in the single cow.” — Irish Proverb

“Any man who owns a cow can always find a woman to milk her.” — Irish Saying

After spending last weekend in Chicago with some Badgers, Spartans, Buckeyes and various other varmints, I was reminded that Chicago starts St. Patrick’s Day early with a parade on Saturday. The streets were packed with throngs of green-clad celebrants and we watched as the Chicago River was dyed green in compliance. I’m not sure I understand the difference between an Irish proverb and an Irish saying … or what is the meaning behind the bovine suggestions here. But given a choice, I think every portfolio needs more than one cow to avoid the adverse effects of cow tipping.

The average Value Line low total return forecast for the companies in this week’s update batch is 3.9% — slightly higher than the 3.7% for the Value Line 1700.

Value Line Low Total Return (VLLTR) Forecast. The long-term low total return forecast for the 1700 companies featured in the Value Line Investment Survey is 3.7%, up slightly from 3.6% last week. For context, this indicator has ranged from low single digits (when stocks are generally overvalued) to approximately 20% when stocks are in the teeth of bear markets like 2008-2009. 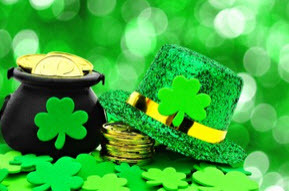 Breaking News: Rite-Aid (RAD) actually has a financial strength rating (2%). While Value Line maintains its “C” (0%) rating on Rite-Aid, Morningstar checks in with a “C” … and the effective interest rate is still steep at 6.8% but it is better than it was!