We refer to market fraught with turbulence and emotions as “popcorn days.” In most cases, it’s a spectator sport as panic or exuberance is met with explanations and rationale that are back-fitted for the day. And these memes are among the most recyclable phenomenon on the planet. The same logic often works in both directions. People are selling today because _____ aligns pretty nicely on other days with People are buying today because ______. 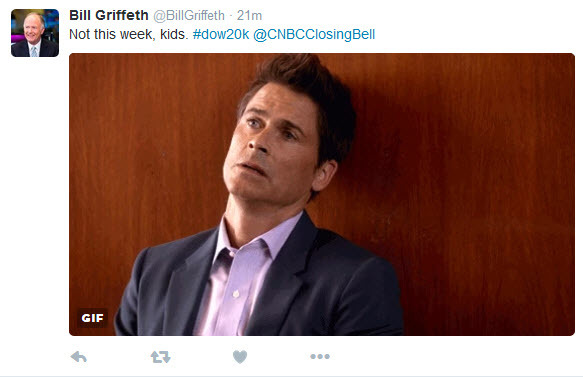 This week, I demonstrated (again) why I could never be a day trader. I really thought we’d reach Dow 20,000 although I would never have taken out a second mortgage on the theory.

Grinchy Bill Griffeth had some fun with the Dow 20,000 enthusiasts with the accompanying tweet made during Friday’s Closing Bell segment on CNBC.

Other antagonists sent messages that 4 days of prolonged Dow 20,000 watching should probably be treated with a trip to the doctor.

But, we got close … coming within 34 points before Janet Yellen and her Rogue storm troopers at the Fed rained on the parade at 2:30 PM ET on Wednesday. The rest of the week had some moments — but it was pretty much like watching salmon flipping up the ladder. We learned on our Alaska cruise that despite a brief fling when the salmon reach their birthplace, it doesn’t end well. And the week didn’t end well for our box of Dow 20K party hats.

Value Line Low Total Return (VLLTR) Forecast. The long-term low total return forecast for the 1700 companies featured in the Value Line Investment Survey is 3.3%, unchanged from 3.3% last week. For context, this indicator has ranged from low single digits (when stocks are generally overvalued) to approximately 20% when stocks are in the teeth of bear markets like 2008-2009.

Normally we “cut off” the list at a MANIFEST Rank of 95 or 90 … and you’ll note that we had to go a little deeper in order to have a list this week. Study and shop well.