Skip to content
HomeAnalysis Across The Chasm
This excerpt is an example of our weekly update for subscribers where we share observations on the analysis update batch for the week and tackle issues of relevance for long term investors.  Subscribe or launch a test drive.  For more info:  https://expectingalpha.com/about/ 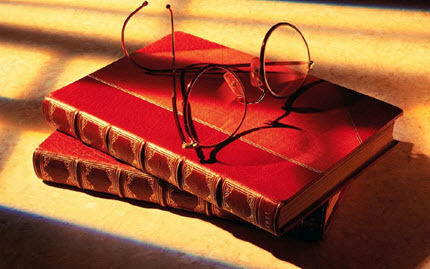 “An hour with a book would have brought to your mind,
The secret that took the whole year to find;
The facts that you learned at enormous expense,
Were all on a library shelf to commence.” — via Ted Brooks and Audels Handbook for Mechanics

“My advice is read everything you can.” — Warren Buffett

This week’s update batch includes a number of cyclicals including some of the leaders from the oil patch. Subscribers and Round Table participants have sometimes wondered about the selection of companies like BP (BP) by Hugh McManus. Like a good book, sometimes a modified or evolving perspective is required to put less traditional selections in context. So far as books go, for this topic we’d urge some consideration of Peter Lynch and the Magellan track record investing in cyclical companies. Hugh has the highest relative/excess return, since inception, for all Round Table participants. As always, it’s not for beginners but the rewards can be outsized…

Analysis Across The Chasm 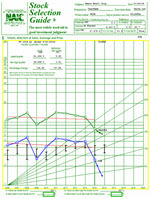 During our stock studies, we are sometimes confronted with a Kobayashi Maru, a test that seems to defy a solution. The last time we remember seeing this on a fairly widely spread basis was while attempting to do stock studies during the Great Recession of 2008-2009.

The Kobayashi Maru is a training exercise in the Star Trek universe designed to test the character of Starfleet Academy cadets in a no-win scenario. The Kobayashi Maru test was first depicted in the opening scene of the film Star Trek II: The Wrath of Khan and also appears in the 2009 film Star Trek. The test’s name is occasionally used among Star Trek fans or those familiar with the series to describe a no-win scenario, a test of one’s character or a solution that involves redefining the problem.

Recessions and large speed bumps wreck SSG-based trend analysis. Ken Kavula and I were faced with challenging studies much more frequently during the Great Recession.

Cyclicals are challenging. Sometimes a 10-year visual analysis isn’t enough to build an image and understanding of long-term growth. We advise beginning investors to avoid companies like this. The price collapses can be catastrophic as economic cycles unfold. But Peter Lynch suggested that significant rewards await experienced investors who can pass the seemingly no-win scenario test. It is in this context that Hugh McManus chooses companies like Bank of America (BAC) … [Yes, Virginia, financial sector stocks are often quite cyclical] … BP (BP) and Conoco Phillips (COP).

Hugh has chosen a number of these companies for the Round Table tracking portfolio. It is worth noting that Hugh has the highest relative return among all participants and contributors. His time horizon is truly massive and he seeks opportunities that are, in Cy’s words, “more temporary than terminal.” He invested in BP (BP) as the leak in the Gulf was dominating the news cycle.

The rhinos (Wall Street analysts and institutions) overreact. Period. In the case of Petroleum (Integrated) companies, I wouldn’t be surprised to see that 2020 actual result more closely match the trend line shown in the accompanying figure. Sometimes, experienced investors simply have to look across the chasm — imagine what it may be like on “on the other side.”

Captain James T. Kirk, as a cadet, was victorious in a No-Win scenario by changing the rules. He reprogrammed the simulation. When faced with a chasm, sometimes you just gotta invest like Captain Kirk.
.

Attrition (reduction in long term forecasts) seems to have abated a bit for this batch of Value Line updates but remember this is a challenging and cyclical minefield of companies (in general) … shop carefully. There are very few widely-followed or Round Table companies on this week’s menu. 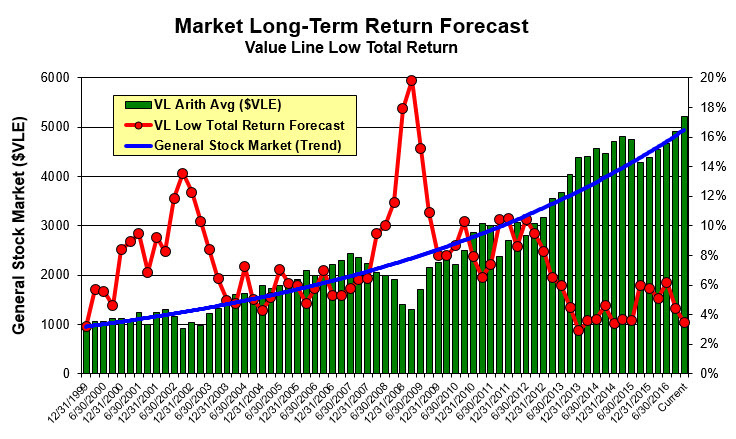 Value Line Low Total Return (VLLTR) Forecast. The long-term low total return forecast for the 1700 companies featured in the Value Line Investment Survey is 3.5%, down from 4.3% last week. For context, this indicator has ranged from low single digits (when stocks are generally overvalued) to approximately 20% when stocks are in the teeth of bear markets like 2008-2009.

It’s another Saturday morning as we explore what’s on the mind of our fellow long-term investors. This open house format webcast invites you to participate. We’ll share some thoughts on stocks and topics and issues but mostly we’d like to hear from you.

As Jeff Traeger pointed out:

Notable change in Value Line’s asset allocation model as of 11/21/16. Common stock allocation moved down from 65% – 75% to 60% – 70%. This is not an every day occurrence and so is worthy of note. The Value Line commentary indicates that the market is still sound but that the higher price levels signals investor caution. The last change in allocation was an upward move on 2/22/16.

Reminder: We believe elevated safety measures (more emphasis on quality, for some higher percentages of cash equivalents) is merited when the blue long-term trend line crosses through 0.0.

Discover the successful investing approach used by hundreds of thousands of investors over the last several decades. By focusing on company quality, return forecast and growth forecasts — we design and manage portfolios that are built to beat the market.

Introductory pricing is only available to households or customers at a business address who have not been subscribers to Manifest Investing within the last 180 days. If you respond to this offer but do not qualify for introductory pricing, we reserve the right to reject your order or prorate your subscription term to reflect current subscriber pricing. This offer may be withdrawn at any time.