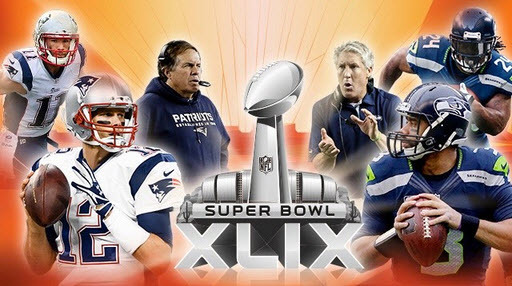 Once again, there’s not a clear “old NFL” team again this year. But Marshawn Lynch likes Skittles and all of those Super Bowl pigskins will be inflated with laser precision accuracy to the right pressure. A victory by the surging National Conference champions would be “most like” an OLD NFL victory … so investors across this nation probably ought to be in the Seattle camp. The Patriots are clearly on old AFL team and the stock market is vulnerable to a Super correction at some point.

The defending champion Seattle Seahawks are led by QB Russell Wilson. Wilson has a streak of 83 straight games — dating back to high school (I think) — where his team has led in the scoring column in each game. That’s quite a streak and it was seriously in jeopardy last week versus the Packers, but an improbable miracle kept Wilson’s run intact. Many people will expect the Seahawks to lead Tom Brady’s Patriots on Sunday — some even at the end of the game.

It’s time to get out there and BUY SOME STOCKS. 🙂