The recent swoon in the energy sector has prompted some to suggest that it’s time to back up the tanker truck — what could possibly go wrong? “All of these companies are on sale.”

Not so fast. As we pointed out in last week’s update, we expected reductions in forecasts from the likes of Morningstar and others and it’s gently underway. As a case in point, Morningstar’s fair value for Schlumberger (SLB) has been recently reduced from $145 to $124. Other companies seem to be following suit. S&P already had suppressed expectations (relative to Value Line and Morningstar) and they have actually trimmed a number of estimates.

As the following graphic shows … after an extended trading range, the price of $BRENT has been pummeled, now down some -42.5% for the trailing 52-weeks: 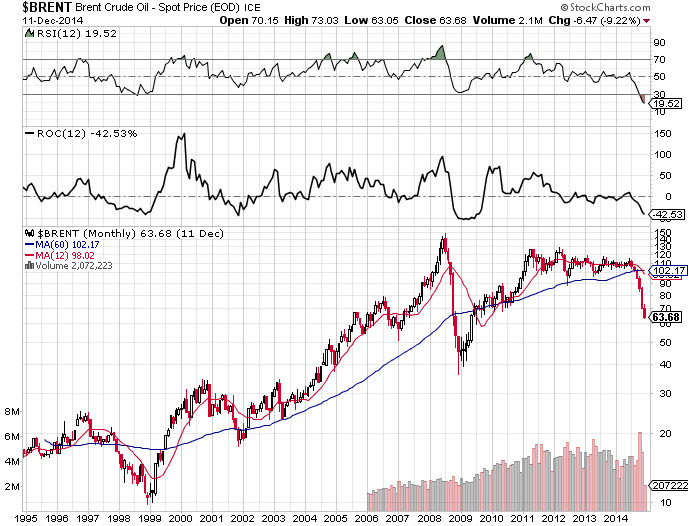 The S&P energy sector fund (XLE) has been punished also — with some lag — and with less damage, at least so far, as the sector leaders are down -15% over the trailing 52-weeks: 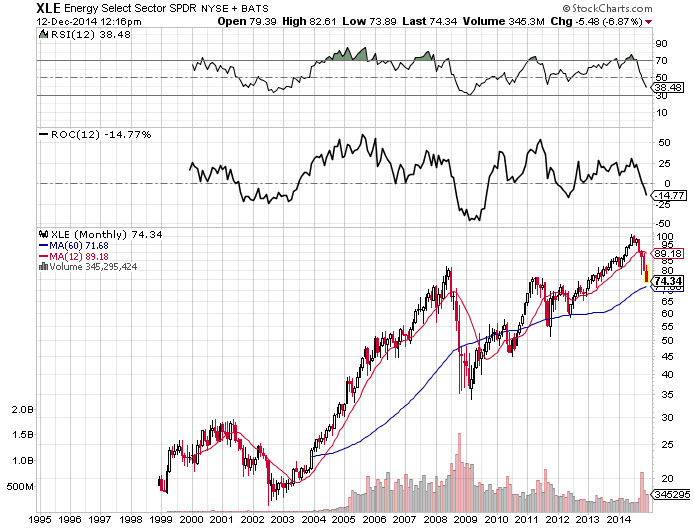 There are 44 companies in XLE and we’ve listed the top 16 here (with one exception … BP is not part of XLE … but we listed BP here in response to the Forum discussions) and you’ll see a number of industry leaders and stalwarts. The majority of companies in XLE are components of the S&P 500. Note that these 16 companies account for 75% of the index performance and the top three: Exxon Mobil (XOM), Chevron (CVX) and Schlumberger (SLB) account for 40% all by themselves.

The Morningstar P/FV cells that are highlighted are at least one standard deviation from the median P/FV ratio. These can be thought of as potentially “on sale” or worthy of study. The same highlighting applies to the S&P entries. The solo entry highlighted in red, Pioneer Natural Resources (PXD) has a P/FV at least one standard deviation greater than the median — potentially a selling candidate.

Is it time for some Christmas shopping?

Based on a multi-year chronicle for XLE, the return forecast has now reached a multi-year high — suggestive of one of the better buying opportunities over the last 7-8 years.

As always, quality matters … and the $/bbl trends are not supportive of higher cost producers, like the offshore drillers (yet).

… because it’s not just oil. In fact, there may be some opportunity in companies that are less directly affected by the OPEC smoldering. In any case, here’s a quick shop until you drop for the energy sector:

One thought on “Energy Patch: Black Gold or Minefield?”