Skip to content
HomePosts tagged 'Profitability Analysis'
We collectively owe all Value Line analysts an apology. We’ll use this household products leader — and walking, talking and breathing Up, Straight & Parallel business analysis — to take a closer look at profitability forecasting.

Church & Dwight Co., Inc. engages in the development, manufacture, and market of household, personal care and specialty products. It sells consumer products under a variety of brands through a broad distribution platform that includes supermarkets, mass merchandisers, wholesale clubs, drugstores, convenience stores, dollar, pet and other specialty stores and websites all of which sell the products to consumers. The firm focuses its marketing efforts on its brands, which includes ARM & HAMMER, TROJAN Condoms, XTRA laundry detergent, OXICLEAN pre-wash laundry additive, NAIR depilatories, FIRST RESPONSE home pregnancy and ovulation test kits, ORAJEL oral analgesics and SPINBRUSH battery-operated toothbrushes. It operates through the following segments: Consumer Domestic, Consumer International and Specialty Products. The Consumer Domestic segment includes the eight power brands and other household and personal care products such as SCRUB FREE, KABOOM and ORANGE GLO cleaning products, ANSWER home pregnancy and ovulation test kits, ARRID antiperspirant, CLOSE-UP and AIM toothpastes. The Consumer International segment primarily sells a variety of personal care products, some of which use the same brands as its domestic product lines in international markets. The Specialty Products segment produces sodium bicarbonate, which it sells together with other specialty inorganic chemicals for a variety of industrial, institutional, medical and food applications in U.S. The company was founded by Dwight John and Austin Church in 1846 and is headquartered in Ewing, NJ. [Source: Wall Street Journal] 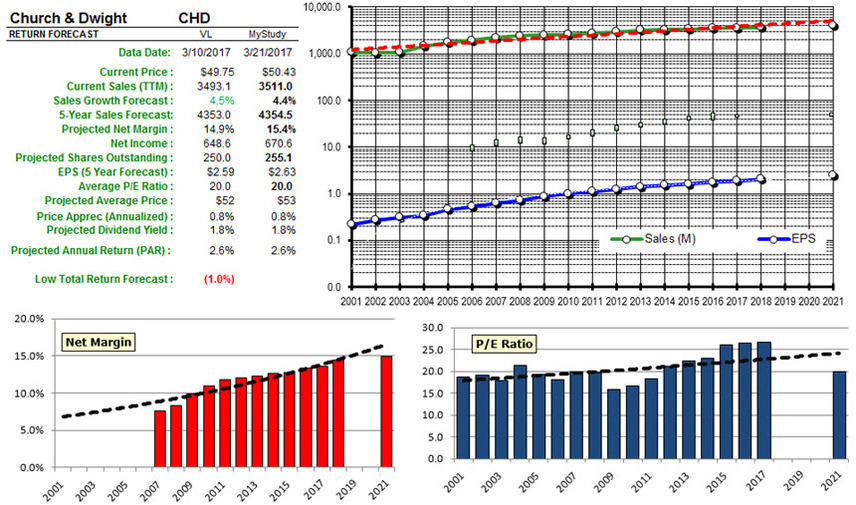 I think we might owe the Value Line analysts an apology.

This might be one of those moments when we realize that something we’ve believed, shared and taught just doesn’t work out the way we expected.

The culprit is usually a Value Line company report. You know the ones I’m talking about. The companies that have been running close to a 5.0% net margin for the last few years and the Value Line analyst has a 3-5 year forecast of 7.5% for the projected net margin. We snicker. Some of us guffaw. Almost all of us discount the forecast.

It’s probably time for a deep breath. A few more moments with curved shower rod curtains while we tack the ends of the ham and restore it to Grandma’s oven. (See Cutting Off The Ends for more on this subject)

The second part of an SSG-based stock analysis includes a look at profitability trends.

Faced with slide rules and abacus beads, George Nicholson resorted to a moving average for “instant trend analysis.” It’s very straightforward. A comparison of current conditions (higher or lower) versus the trailing 5-year average tells us whether recent results are above (good) or below (bad?) the longer term trend. There is nothing wrong with this convention.

But we use the Preferred Procedure — a business model analysis — to build the long term return forecast for the companies we study and analyze. And we’ve generally used the trailing 5-year average net margin as the projected profitability.

(1) This will build in some conservatism, and (2) we lean on the “excuse” that we’re doing the analysis for each and every company the same — so it’s all “relative.” This too is a decent, but flawed, convention. Even if it’s WRONG. 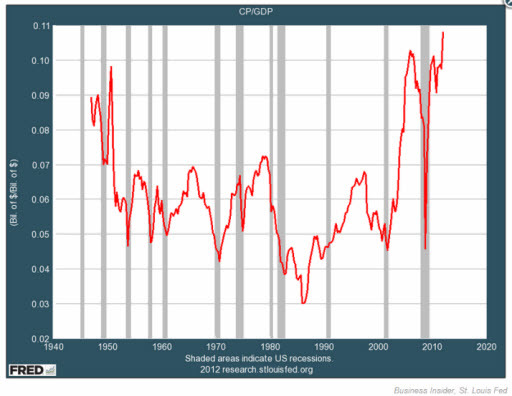 The problem is that we’re striving for better absolute forecasts.

“The moving average forecast is based on the assumption of a constant model.” — University of Texas, Statistics

Does anything about that accompanying chart of long-term aggregate net margin (1940-Present) look CONSTANT???

The fact that we have embedded analyst estimates for profitability for this year, next year and 3-5 years out (when available) for our long-term forecasts means that we are less impacted by this condition than what is depicted on the right.

I think it’s clear that we’d want a forecast for CHD that is essentially between the VL 3-5 year forecast and the exponential regression shown on the left image. It’s probably also clear that for a profitability profile like the one on the left, the trailing average forecast is going to consistently produce a lagging forecast.

Remember the example of margin expansion by Coca-Cola over the years cited by Steve Sanborn. It’s simply a reality that profitability characteristics shape and evolve over the life cycle of all companies.

The problem is that there aren’t very many companies that fit this description. Our database includes a forecast algorithm that essentially smoothes and weights the more recent years. When we use this method for Church & Dwight, our 5 year net margin forecast aligns very closely with Value Line’s 3-5 year construct. We checked about (50) more companies — and those forecasts that we snickered and guffawed about — all checked out very closely.

We may owe the Value Line analysts an apology.

We will begin infusing this method with updates going forward until the entire database (at Manifest Investing) is converted.