A number of Manifest Investing community participants have recently forwarded this message to investment club partners, friends and family.  It’s a timeless reminder from 2008-2009, Warren Buffett … and we doubled down on it recently.

Most of the stock decline happened in the last three months as Berkshire posted a fourth straight profit drop amid sagging insurance results. The company still beat the 38% tumble of the S500, the 14th year in 20 that Buffett outperformed the benchmark. Just six of 1,591 (0.37%) U.S. stock mutual funds with at least $250 million in assets made money for investors last year, according to data compiled by Bloomberg.

“In 2008, there was nowhere to hide,” said Guy Spier, chief investment officer at Aquamarine Capital Management, which holds shares in the Omaha, Nebraska-based company. “Berkshire can’t escape the general fate of American businesses. What Buffett tries to do is ensure that Berkshire Hathaway does less badly than other companies.”

Buffett built Berkshire over four decades from a failing textile maker into a $150 billion company by buying out-of-favor stocks and businesses whose management he deemed superior.

It’s a perspective that has led to 20% annualized returns over multiple decades. Ignore it only if you’re willing to settle for a dimmer future. 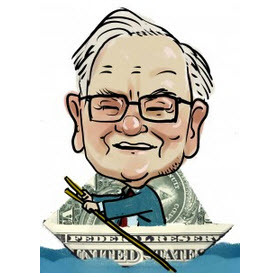 I recently watched a 10-year retrospective on the financial crisis of 2007-2009.

Do you remember Buffett’s reaction to one of the most challenging market moments of his lifetime?

Answer: I hope I live long enough to experience a couple more of these.

“Don’t watch the market closely,” he advised those worried about their retirement savings at the time. “If they’re trying to buy and sell stocks, and worry when they go down a little bit … and think they should maybe sell them when they go up, they’re not going to have very good results.”

… he recommends investors “get ice cream with their kids and say hi to a friend they haven’t spoken with in a while.”

And he’d appreciate it if you’d find the nearest Dairy Queen for the occasion.