During the October Round Table, we discussed our exploration into the possibility of building an excess/relative return based trigger to limit losses and preserve capital.  We repeat. This is intended to be incremental and additive to the time-honored selling guidelines reviewed here and this is a work-in-progress.  We’re continuing to review whether the trigger point should be variable (a function of inherent characteristics) and whether the 1-year vigilance period is appropriate.  This reprint is a recent cover story from Manifest Investing that provides a thumb nail of the concept/project.

“The ability to select stocks, manage them over time and know when to sell them is incredibly difficult, even for professional fund managers.” — Barry Ritholtz 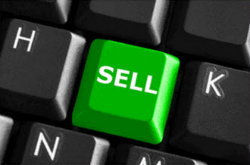 When to Sell: The Challenge of Reason We don’t want to give the impression that any of the time-honored selling disciplines change with the exploration/concept described here. We still believe that the reasons for selling are short and simple: (1) You need the money, (2) Signs of quality degradation and (3) You can make the portfolio better. That said, we’ll explore this capital preservation and rate of return potential enhancement and decide if it’s a worthy improvement in our arsenal.

During the April Round Table, we struck a community collective nerve. We reminded that we’ve deployed a new selling discipline in a few different places that is based on the notion of an alert, or a flag, based on relative return. Based on the case studies with the embryonic Fave Five Weekend Warriors and Round Table tracking portfolios the concept is compelling. The approach is incremental. Nothing about our traditional selling disciplines is disrupted. This month, we explore the impact of this concept on the Solomon Select monthly features over the last 11-12 years. will be intended to side step excursions and preserve capital.

“The ability to select stocks, manage them over time and know when to sell them is incredibly difficult, even for professional fund managers.” — Barry Ritholtz

I’d go a step further than Barry and say that “especially” might be more acurate (than “even”) for rhinos and average investors. It might even be more challenging when it comes to companies doing share repurchases. But that’s a story for another day.

We’re here for the returns. Anything that offers the potential of an incrementally higher performance is something that grabs our attention. We’ve long been troubled by selections that have underperformed, rapidly losing 60-80% of the purchase price — in some cases within a few months of the original decision. It seems like the damage is often done in 90 days or less. So we decided to subject the monthly decisions made for the Solomon Select feature to this concept. Many stocks have been “sold” when the stock price soared and the return forecast dropped below the market average. Victory laps are always fun. Those stocks have been celebrated and “dismissed” from the tracking portfolio over the years. But what about the other extreme? It’s a question that has haunted many of us — for a long time. 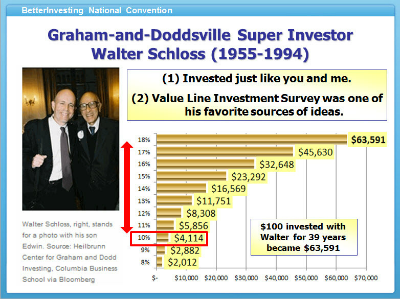 Total Assets vs. “Small” Incremental Returns. The audience at the Better Investing national convention treasured this reminder about small advantages and huge gains in incremental results. We do, too.

Investing $100 each and every month into the Wilshire 5000 since the inception of Manifest Investing would deliver a passive rate of return of 9.6%.

So far, using the original three selling criteria, the tracking portfolio rate of return is 11.1% — a relative rate of return vs. the total stock market of +1.5%.

The accompanying figure courtesy of Walter Schloss and his track record is a powerful reminder about the vast gains possible over the long term from a “percentage point or two.” And yes, Virginia, it’s exponential. 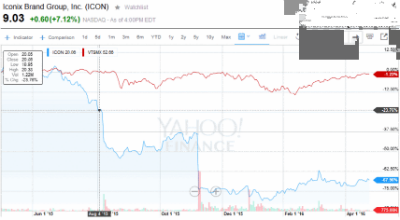 Iconix Brands (ICON): Time Out! Poster child for a concept. $1000 invested in ICON for the Round Table tracking portfolio had sunk to $800 against a flat total stock market. “Selling” preserved the $800 which would have plummeted to $330 within a few months.

“Time Out” Based on Relative Return

The concept is simple. It’s inspired by one of the steadfast rules on selling stocks made popular by Investor’s Business Daily and William O’Neil. Their discipline is to sell any holding that drops 7-8% from the original selection point. In our view, this would lead to excessive turnover if we attempted to apply the discipline to our style of investing. But the preservation of capital concept has merit and the general approach of “stopping” to check for assumption errors, etc. seems worthy.

But we’d want to avoid selling a stock that drops 8% when the total stock markets drops, for example, 10%. Hence, our focus and emphasis on relative return. We want to single out stocks that have under performed the overall market on an individual, and comparison, basis.

We’ve discussed this at a few Round Table webcasts and most notably during the selection of Iconix Brands (ICON) during April 2009. We now see the ICON case as something of a “poster child” for the concept. The original $1000 invested in ICON as part of the Round Table tracking portfolio on 4/30/2015 had dwindled to $800 by 8/3/2015. The Wilshire 5000 had actually gained 0.1% over the same period. As shown in the accompanying figure, ICON continued its swoon. This finance.yahoo.com chart is constructed by comparing the price of the stock with VTSMX with the selection date as the start date and displayed on the far left. The relative return is the difference between the blue and red lines over time. 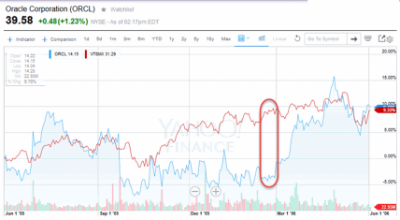 So we asked a question. Actually, a few questions.

(1) Are there any cases of a stock “bottoming” and getting toggled out of the portfolio where the selection had gone on to deliver market-beating returns?

One of the earliest Solomon Select features was Oracle (ORCL) back in May 2005. As shown, ORCL trailed the overall stock market by approximately 15% in early 2006. Setting the limit closer to 15% would have stopped out this strong performer — +7.2% annualized relative return for 11 years. We were not able to find another case where a “premature” time out would have ultimately prevented a strong long term performance.

(In all fairness, companies like Coach and Urban Outfitters also have SUCCESSFUL close outs within the Solomon Select tracking portfolio — a condition that we’d probably reasonably expect from this relatively volatile sector.)

So we’re generally looking at a couple of instances per year — a notion shared by one Round Table webcast participant who wondered if this wouldn’t simply flag companies on the wrong end of the Rule-of-Five … and reduce losses, pain and suffering? Bottom line: We don’t know if 20% is the number — it may be variable and perhaps a function of quality, for example — but a target setting in this range would not seem to produce excessive turnover.

(4) What is the typical holding period for these triggered transactions?

Not exactly. An investor could use spreadsheets but we’re not aware of an existing commercial source for tracking this condition. Would we add it to Manifest Investing? Possibly. If our explorations continue to show this potential, we’ll consider adding this type of performance tracking as a portfolio management tool.

Our Like-Minded Community Heard From

We think the concept is both intriguing and compelling. Our community of investors apparently agrees as we’ve received an unusually large amount of correspondence on the subject. Most of it rhymes with this:

“I think you guys could really be on to something here. In the same way that Stock Selection Guide based studies can be messed up by a plummeting stock price – with Upside-Downside ratios run amok – and a company that is struggling actually can appear ‘more attractive’ on a Guide … I think this concept holds merit for gauging and challenging those stocks with PARs greater than the sweet spot.”

“This could be a game changer. I’ve been looking for a concept like this for a very long time.”

In short, I think the potential is promising. Probably at least as compelling as embedding the analyst estimates in our business model analyses. It’s not a violation of “buy low and sell high” because we’re here for the returns and it’s the bigger picture, the cumulative results that matter. We’ll continue to test other portfolios and implement standing procedures that may become disciplines and best practices over time.