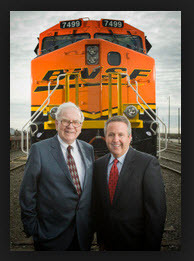 Investors have joked that Warren Buffett’s purchase of the Burlington Northern Santa Fe railroad was simply the fulfillment of a child’s unfulfilled Christmas wish. And on a grand scale.

On November 3, 2009, Warren Buffett’s Berkshire Hathaway announced it would acquire the remaining 77.4 percent of BNSF it did not already own for $100 per share in cash and stock – a deal valued at $44 billion. The company is investing an estimated $34 billion in BNSF and acquiring $10 billion in debt. On February 12, 2010, shareholders of Burlington Northern Santa Fe Corporation voted in favor of the acquisition.

I haven’t dug in to attempt to determine the rate of return on Burlington Northern (yet) but the average annualized return for the average railroad since the time of the transaction is 29.8%. (Berkshire’s return on BNSF is probably in the annual letter to shareholders.)

Everything I’ve seen and remember suggest that the profitability levels of 2004-2009 were fairly typical, representative of general net margin levels going back for quite some time.

Note the inflection and the increased profitability that’s been a powerful work-in-progress for the last 5-6 years.

How might he have known that this was going to happen?

Are there any documented instances or evidence of why this is something that could have been anticipated back then?

Is there any place or industry today that has a similar profitability enhancement potential?

One thought on “Railroading Profitability: A Quest”