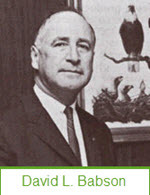 Many of you are well acquainted with the “strong nudges” suggested by our friend Ken Kavula when it comes to the subject of “Buy The Best!” Ken is reinforcing — in his strongest professional educator voice — the importance (and path to opportunity) of studying a stock in the context of its industry or peers. This was among the strongest encouragements that a nation of investors heard from George Nicholson, Jr. CFA — widely regarded as the grandfather of the modern investment club movement. Another professional investor, David L. Babson, contributed a series of columns to Better Investing magazine, starting in 1960 and continuing for a few decades. One of his favorite industries was Specialty Chemicals and he believed that virtually every investor should have a stake in this industry … suggesting that if “chemistry is life” then it follows that industry leaders in this realm ought to be candidates for long-term portfolios. We’ll kick off this series with a look at Pharmacy Services, because we think Mr. Babson would concur that this is an area to discover, shop/study and own … for as long as it makes sense to do so.

“The Pharmacy Services Industry has historically been viewed as a safe haven for investors seeking steady growth and preservation of capital. However, things have changed a bit in recent times, owing to the aging of the American population and an altered industry landscape. These stocks now have more of a growth profile than they had in the past. There is much opportunity for expansion, with billions of dollars in business up for grabs. But there is also greater competition, coming from every direction, as even non-traditional channels are looking to get in on the act… an evolving industry…” — Value Line

The companies in this industry are generally either large drug chains — Walgreen (WAG) and CVS Health (CVS) — or pharmacy benefits managers, or PBMs — Express Scripts (ESRX) — … or some combination of the two. In many cases it’s a classic brick-and-mortar story where the corner drug store is battling the “Amazons” of online/mail-order prescriptions. And of course, those “corner drug stores” have their own web segments and/or alliances in the drug supply chain.

Pressure to stay competitive has prompted some in the industry to think outside the box and use acquisitions to gain access to a bigger scope of business.

Prescription growth rate is a indicator of a promising field of opportunity for the combatants in this industry. Demographics point to a rise in the number of Americans aged 65 and older over the next two decades. Increasingly, Baby Boomers will require medical care and pharmaceuticals, auguring well for the industry’s sales and earnings prospects. The largest pharmacy services providers are best positioned to reap the coming rewards. We repeat … field of opportunity.

As shown in the accompanying graphic, the industry growth rate is approximately 5%. The step change in industry sales between 2011 and 2012 is the acquisition of Medco by Express Scripts.

It’s a battle in progress out there. It might even be a war. The industry profitability seems capable of restoring to the 3% level, with a nod to the 3.5-4.0% contest being waged between WAG and CVS. It’s interesting to look back at Monsters Being Created and how these industry giants have fared since our September 2008 cover story.

The industry average P/E ratio is approximately 15.0x for companies as they reach maturity. CVS Health and Walgreen rate a premium nod as they continue to dominate the profitability roost.

The accompanying Instant Industry Study has been sorted by Quality (Descending). We generally find it most rewarding and better sleeping conditions to shop at the top of the list. The return forecasts (Projected Annual Return, or PAR) are fairly subdued. The average return forecast is currently 6% — so these aren’t much to write home about. This is mainly due to a strong five year run where the Drug Retailers index has gained approximately 21-22% (annualized) over the last five years.

So … patience is a good idea to wait for one of these industry leaders to display an attractive return forecast — either via a stock price reduction and/or a boosting of fundamentals to strengthen the expectations.